AnAn He joined Code for Philly in July 2022 as the Operations Lead and recently stepped up as Co-Director in September. The group had been searching for a second co-director since Jarvis VP Kat Jost filled one of the two spots in early 2022. Together, they will lead the civic tech organization’s strategy behind 2023 programming and local partnerships.

AnAn’s journey with Code for Philly began last summer after completing the Leadership Philadelphia Keeper’s Program which sparked her desire to make a difference and give back to the city. The program which aims to recognize and retain Philadelphia’s most promising leaders was where AnAn met Kat Jost and learned about the civic tech group. “I met Kat and she told me she was involved with Code for Philly and I thought, ‘That’s so interesting…doing common good for the community and people”, AnAn said. 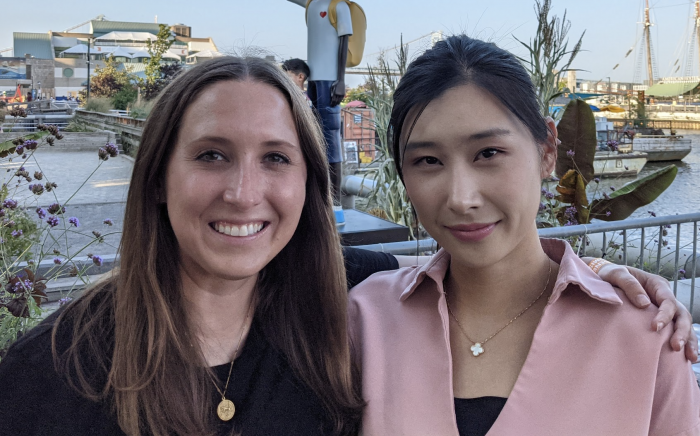 After officially joining Code for Philly in July, AnAn took on the role of Operations lead, a position responsible for managing the Code for Philly x Comcast Tech Fellowship program. She explained that her 5-year history with Comcast and newfound passion for civic engagement through the Keeper’s program was the perfect combination for her to “create a level of impact” in a program designed to help underrepresented groups break into tech.

After organizing the Tech Fellowship, transitioning to co-director felt like a natural next step for her,

“I’ve been with Comcast since 2017 and at end of July, I accepted a new position at Comcast to transfer from the IC track to software engineering manager. Because both jobs [CFP co-directorship and S.E manager] are leadership work, both of them are really relatable in that they feel similar, they are both leadership roles in tech-related work”

When asked about her goals for Code for Philly in 2023, AnAn spoke passionately about amplifying the organization’s already considerable successes. Since resuming in-person meetups in 2022, Code for Philly has hosted over 7 events and welcomed over 200 new volunteers.

“…Code for Philly is really doing so good nationwide compared to other cities, my goal is to keep making it great, and even better, and to work and collaborate with more parties in the city”, He said.

I simply wanted to thank you a lot more for your amazing website you have developed here. It can be full of useful tips for those who are actually interested in this specific subject, primarily this very post. cci 400 primers

I really enjoy simply reading all of your weblogs. Simply wanted to inform you that you have people like me who appreciate your work. Definitely a great post. Hats off to you! The information that you have provided is very helpful. 50 bmg primers

I want you to thank for your time of this wonderful read!!! I definately enjoy every little bit of it and I have you bookmarked to check out new stuff of your blog a must read blog! remington sts 209 primers

You have a genuine capacity for composing one of a kind substance. I like how you think and the way you speak to your perspectives in this article. I concur with your mindset. Much obliged to you for sharing. alliant 410 powder

This is a wonderful article, Given so much info in it, These type of articles keeps the users interest in the website, and keep on sharing more … good luck. green dot powder in stock

Waow this is quite pleasant article, my sister love to read such type of post, I am going to tell her and bookmarking this webpage. Thanks federal 210m primers

Hi there, I found your blog via Google while searching for such kinda informative post and your post looks very interesting for me. 6mm rem brass

It was a decent post to be sure. I completely delighted in understanding it in my lunch time. Will definitely come and visit this blog all the more frequently. Much obliged for sharing. h4895 powder in stock

You have a great sense of writing I must say. Your post has those facts which are not accessible from anywhere else. It’s my humble request to u please keep writing such remarkable articles h1000 powder