All told, more than 30 participants took place on at least eight teams, though other side projects and deviations were shared as is often the case. At least six officials from the SEPTA emerging technologies team were on hand throughout the two-day event. In addition to a half dozen small projects to make SEPTA more rider friendly, the transit agency announcedit had opened up a dozen new data sources, as documented on a SEPTA URL including the word ‘hackathon,’ an innovation itself.

“I have never seen a city agency be this supportive and this present at a hackathon,” said Mark Headd, the Voxeo Labs developer who organized the event with web development firm Jarvus, which operates Devnuts and Technically Philly recently profiled. “So it’s no surprise we saw so many strong, viable products come out of it.” 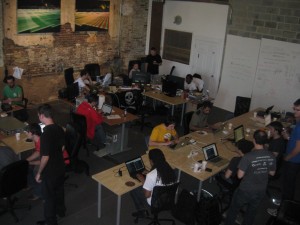