The event, hosted by Devnuts in Northern Liberties and in partnership with the transit agency, introduced a variety of applications, including one featuring an interactive way to browse transit lines, a simulator for SEPTA staff to test changes in train and bus schedules and a Foursquare app that allows users to see upcoming trains as soon as they check-in to a station. 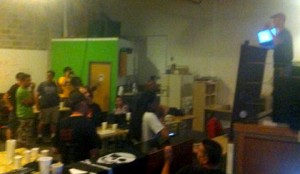