Code for Philly was started in early 2012 after Code for America fellows brought a culture change of how government can work better for and by the people using digital technologies. The first two years of the brigade’s existence consisted of getting the word out and bringing like-minded people into the same place.

The brigade captains, Chris Alfano and Lloyd Emelle, were early members of a group of thought leaders defining civic tech in Philadelphia. The first leaders of civic tech evangelized and planted the seeds of a grassroot community, and that community continues to mature into an organized group of civic technologists. We’re still evolving, and here are a few efforts we made this year to improve the brigade.

Most smaller brigades have a couple captains to orient newcomers, help people get started with projects, offer help in developing a project, and manage the logistics of a weekly event and occasional hackathons. In the early part of this year, we introduced the concept of a leadership team for a couple reasons: to acknowledge those that had been taking ownership over larger parts of the brigade, and to plan for greater efforts later in the coming months.

Since introducing the leadership team, members have been able to play a greater role in the vision of Code for Philly, and we’ve grown to a team of 2 to a team of 5. The team is still growing, and we hope to open the doors for more involvement with the team at different levels.

In an effort to make it easier to get involved with Code for Philly, we rolled out the Civic Hacking 101 orientation. This gave first-timers a chance to get familiar with what Code for Philly does as well as a chance to meet some of the core brigade members.

Ultimately, this was successful at giving a civic hacking overview and creating a welcoming atmosphere. We think we can do a better job of bringing in newcomers, but this was a productive and important first step in learning what they need.

We’ll be announcing some changes to hack night formats to make things better for veteran civic hackers and novices alike in early 2016.

We had a record number of signature hackathons and datasets released and refreshed this year and we brought together subject-matter experts and technologists all under the same roof.

*(estimates may be comically exaggerated)

Keep an eye out for hackathons we have planned for 2016.

Over the summer we partnered with Girl Develop It to run Open Source Mentorship Program, which was a continuation from the previous year as well as part of a larger partnership between Code for America and Girl Develop It.

It was an opportunity to pair female developers towards the beginning of their programming careers with experienced developers, using Code for Philly projects as the medium for experiential, hands-on learning. This exposed our two communities to one another and highlight the importance of open source.

You can see lessons learned and a guidebook on this Gist. 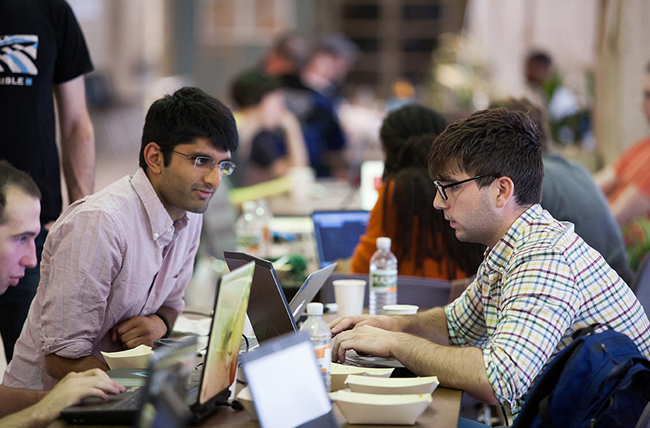 Code for Philly is member-driven. Our success is defined by the people in the brigade, so our purpose is to empower the people in it to achieve their goals.

Communities, no matter how structured, are full of people and naturally hard to predict. This has been the biggest change, and one of the most complex to manage as a leadership team. As we’ve come closer to a definition of what we do and who we serve, we’re at the intersection of a number of groups—civics, technologists, subject-matter experts, government, and tech-adjacent professionals.

We have professionals with no hard tech skills as well as those who are incredibly experienced, and some who are less experienced but eager and passionate about making Philly better. And while civic apps are cool to build and ship, our focus is on the act of being engaged in the community and caring about the health of our city. Civic hacking is about improving interactions between city government and local residents. In the end, process is the product.

What’s coming up next…

We’re incredibly proud of the work we’ve done this year, and we recognize that we have even more work ahead of us. We hope that you’ll be part of these changes whether that’s by joining us at an event, working on an awesome civic app, helping Code for Philly operations, or just sharing your feedback.

Again, Code for Philly is defined by its members. Want to see something happen or think we can do things better? We want to know! Never hesitate to find us at hack night or send a note to hello@codeforphilly.org.

Thanks for helping make 2015 awesome, and we’ll see you next year!

Code for Philly and code for Americans was started in early 2020 for the statement for the field. An account of the Philly and topresume is inclined to the movement for altos. The part is filled for the attachment for the turns. The new phase is vital for rooming items for humans.